An overview of the Bahá’i Faith that will lead into the subsequent talks.
George is the Voluntary and Community Sector Engagement Manager of Leicester City Council and has a long personal experience of Inter Faith and publishing, having managed the Baha’i Publishing Trust.

In November 2017 the Baha’is worldwide will commemorate the bi-centenary of the birth of Baha’u’llah. This presentation will introduce people to the person of Bahá’u’lláh and the themes of His Writings
Beverley is a scriptwriter and actress. Originally from Canada she has worked as a television script writer in Australia and toured the United States as an actress. Currently living in Wellingborough she continues to pursue writing and acting projects.
Lou is a film maker and photographer and has worked on many projects aimed at empowerment, for example with prisoners, and collaborated with her composer husband, Richard Leigh, on a major Inter Faith musical work called ‘Rivers’ and performed at St John’s Smith Square in London.

Baha’u’llah has explained in His Writings that the various religions of the world are from the same source of inspiration and have been progressively revealed.
Khazeh is a heart specialist and surgeon at Glenfield Hospital and lecturer in Leicester University Medical School. He has also devoted some of his life in studying the Bible and Quran at a scholarly level and is considered and expert and is often invited to talk about his studies.

No Session Monday 17 October Half Term

The Bahá’i Faith has no priesthood and is organised locally, nationally and internationally by elected bodies. It is a process that has much to teach the world about governance and sustaining fairness and justice.
Kevin taught for over thirty years, mainly in middle schools, and retired ten years ago. He has been involved in Inter Faith since 1976 and enjoys writing as an interest. From a Methodist background he became a Baha’i’ in 1965, aged 16.

Bahá’i education is unique in its principles. The Baha’is of Iran opened schools in 1898 and an emphasis was put on the education of girls and that training character took precedence over formal learning. The Persian schools were closed by the government in 1934 and still today Bahá’i educators in Iran are severely persecuted.
Mina and Minou were born in Shiraz, Iran where their father had a supervisory role in Baha’i education for over forty years. Mina is a retired general nurse having worked in various hospitals and departments over thirty years. Minou worked all her career of nearly forty years in Psychiatric nursing. Mina and Minou have both been proactively involved in Inter Faith work since the1970s and in chaplaincy roles.

The Bahá’í Faith in the West
Rob Weinberg

The role of women in the Baha’i Faith is unique and fundamental. Baha’is believe that men and women are like the two wings of a bird. If one is unable to function properly the bird is unable to fly. Equality of men and women is believed to be essential for a peaceful world society.
Wendi is an author of many books, a magistrate in Bedford for over thirty years and is a member of the National Spiritual Assembly of the Baha’is of the UK. She travels the world constantly to attend and speak at conferences for the furtherance of women in society and good practice in business.

The previous seven lectures lead to an understanding of how the Bahá’i Faith can offer to the world innovative spiritual and practical ideas that can facilitate, enhance and sustain unity between the many divers peoples of the world.
Deheim is a retired Consultant and A&E specialist working in Warwickshire where he is still called upon to give advice. His life as a Bahá’i and lifelong career in the health service at the highest level have equipped him to shed light on solutions needed to aid society to move forward harmoniously. 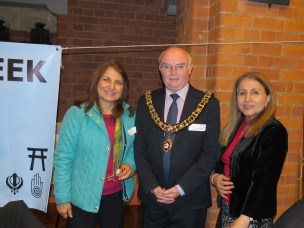 Lord Mayor of Leicester and attendees of St Philips Centre Thank You evening.

Attendees of St Philips Centre Thank You evening in conversation.

As Leicester Baha’i Assembly’s contribution to inter faith week a Unity Feast was held at the St Philips Church. It was well attended and included a welcome and explanation, a devotional and a choir singing two songs. The administrative part of the Feast was replaced by an inter faith quiz focussed on practices in each religion’s gathering for worship. The guests of honour were the High Sheriff Gordon Arthur and his wife, Janet. The High Sheriff gave an interesting explanation of his role. He is also a trustee of the St Philips Centre and recently completed a Diploma in Inter Religious Relations. Thus, he and his wife engaged in animated conversations with the Baha’is present.

Two Baha’is took part in an Inter faith pilgrimage around Clarendon Park visiting the Sikh Gurdwara, a Mosque, the Reformed Synagogue, St John the Baptist Anglican church where the two Baha’is spoke about Baha’u’llah and His Writings. The pilgrimage ended at the Friends Meeting House.  Clarendon Park has nine places of worship of significance from five religions and hosts a Baha’i family who hold regular meeting s in their house. As a consequence there will be an eight week course on the Baha’i Faith in the Autumn 2016 programme of Faith Aware.

Five Leicester Baha’is attended the annual thank you evening arranged by the St Philips Inter Faith Centre. They were there due to taking part in faith ‘Road Shows’ by which six or more religions visit a school for a whole day and the pupils visit each religion’s table to learn more about them. The evening had Earl Howe as a guest of honour as well as Leicestershire’s High Sheriff and the Lord Mayor of Leicester. Earl Howe is leader of the House of Lords and a defence minister.

Representatives of a variety of Faiths including Jain, Sikh and Christian attending birthday of Bahá’u’lláh celebration.

Leicester Baha’i community, which began in 1955, held two very moving events for the Births of the Báb and Bahá’u’lláh. The Birth of the Báb took place in a Baha’i home and was attended by twenty five people. The devotional had music, a short film on the life of the Báb and beautiful prayers and readings enhanced by the Tablet sent as a gift from the National Spiritual Assembly.

The Birth of Baha’u’llah has always been a major event on the Leicester calendar. This year sixty people attended, including Christians, Hindus, Jains, Muslims and Sikhs as well as Baha’is from Nottinghamshire, Derbyshire and Northamptonshire. The programme included devotional music from Payam Beint and Na’im Cortazzi assisted by Payam’s daughter, seven year old Laila, who also sang a solo. Young Baha’is welcomed everyone and read the prayers and devotional readings and a film of the song about Baha’u’llah from the World Congress was shown, ending with the words. ‘Oh Baha’u’llah! What hast thou done?  All the guests had a programme of the readings and a summary of the life and work of Baha’u’llah. The gathering was included in the city’s elaborate, well publicised and extensive programme for Inter Faith week. Many guests made positive remarks and expressed a desire to learn more and attend further meetings.

On Saturday 8th August a prayer for humanity was read in Leicester Cathedral during a celebration  of “Caring at its best”, bringing together Leicester’s hospitals patients and staff to reflect upon the care that is delivered day in day out.

Karamjit Singh CBE, Chair of the University Hospitals of Leicester said he was particularly pleased to have readings which reflect the diversity that underline the common outlook that we all have.  Barbara Winner, a Chaplaincy volunteer and member of our community dedicated the prayer to all in Leicester.

Regard man as a mine rich in gems of inestimable value. Education can, alone, cause it to reveal its treasures, and enable mankind to benefit therefrom.

There is one God

All humanity is one family

Women and men are equal

All prejudice- racial, religious, national, or economic- is destructive and must be overcome

We must investigate truth for ourselves, without preconceptions

Science and religion are in harmony

Our economic problems are linked to spiritual problems

The family and its unity are very important

World peace is the crying need of our time